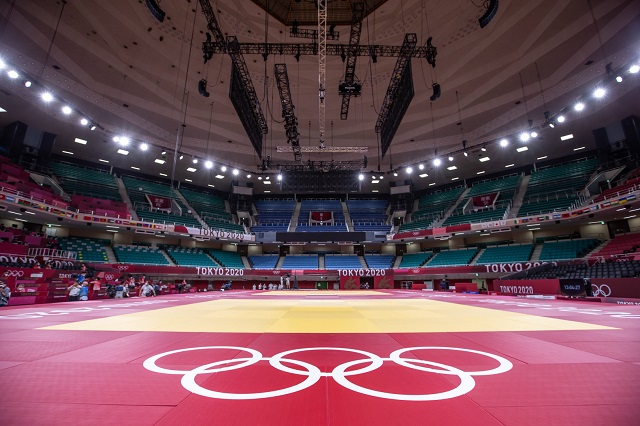 The Olympics often get glorious impression around the world.  However, the gorgeous Olympic facilities are often made of sacrifice of human lives.  This Tokyo Olympics involved at least 3 reported fatality during the construction of Olympic venues [1][2].  The dark side Tokyo Olympic Games is not very well known to the public but the fatality during the construction of Olympic facilities are not uncommon.

A 50-year-old worker who has been working at Tokyo Big Site, a multipurpose convention center, was being renovated into a comprehensive broadcasting media complex for Tokyo 2020 Olympics.  The worker was installing the cable and found unconscious at the construction site on August 8 [1], 2019 .  He was taken to the hospital and his death was confirmed shortly after that.  This really raise the question.  The exact cause of death is unknown.  The summer in Tokyo is brutal.  The high temperature plus high humidity.  The day high was 96 ºF (35.6 ºC) and 60 to 80% of relative humidity throughout the day time on August 8, 2019 [6].  This harsh working condition could cause a heatstroke.  But the authorities declined to comment on the cause of death.  It is unknown that whether this worker had pre-existing medical condition.

Notoriously, the summer weather in Japan is brutal.  approximately 71,000 people were hospitalized due to heatstroke between May and September in 2019 [7].  At least 162 people were died due to heatstroke in the summer of 2019 (as of August 10) [8].   Considering about this climate, the construction workers were exposed to very demanding condition and really challenging to keep up their work.  The humid heat during the summer is well-known fact even before the Olympic Games.  1964 Tokyo Olympic Games were held in October [9], much more comfortable climate for athletic events.

Although Tokyo 2020 organizers were well aware of  summer heat in Japan, they supported to hold the Tokyo Olympic Games during the peak of summer heat [10].  It’s mainly because of business side that many countries take summer vacation during July and August.  Schools are off and families go on vacation although COVID-19 situation made people to travel less.  In order to maximize the revenue potential, it makes more sense for host to hold the Olympic Games during this period.  But it’s extremely challenging for athletes.  A call for change is needed in order to protect the safety of athletes and workers since the warmer summer is expected in the future due to climate change [11].

A  23-year-old Olympic stadium worker committed a suicide in 2017 [2].  The worker was facing nearly 190 hours of overtime in a month.  He was working as a quality control for construction materials.  The schedule of stadium construction was tight due to delayed start and schedule change due to unpopular design.  Also Japan is suffering a labor shortage, applying pressure on the construction industry [12].  This worker went missing then weeks after, his body was found in the central mountain area in Japan.  He left a suicide note that “mentally and physically pushed to the limit”.  Karoshi is a known Japanese term for “overwork to death”.  His work hours were well above the legal threshold of 80 hours a month.

The Unwritten Chapter of Olympic Proposal

This raises a question for a validity of hosting and operating Olympic Games.  Is it worth of doing this?  The athletes spent their whole life to compete for this moment.  They deserve an opportunity to demonstrate their efforts.  But how many human lives need to be sacrificed to host the Olympics?  The fatality of construction workers is the unwritten chapter of the Olympic proposal.  11 fatality for 2016 Rio Olympic and at least 10 fatality for 2008 Beijing Olympic venue related construction are reported [13,14].  Also 14 workers were injured for Tokyo Olympic related construction by the end of 2018. 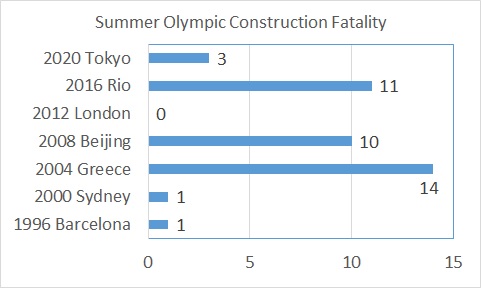 The Protest against Tokyo Olympics as Covid-19 New Cases Increases

The athletes, staff, and reporters are under strict measure of COVID-19 protocols, generally the traveling outside the designated are are not allowed [17].  In addition, the frequent testing is required for the athletes.  Also the negative test results are required before heading to the venue and additional testing may be required after arrival depends on where they come from.  The residents are deeply concerned about the outbreak of Coronavirus from Olympic related activities.  83% of people want Tokyo Olympics to be either delayed or cancelled [18].  Not surprisingly, a series of protest against Tokyo Olympics were taking place prior to Olympic opening ceremony [19].  It was originally reduced capacity.  However, on July 9th, Tokyo Olympic Organizers announced that there will be no spectators at Olympic venues [20].

Total Number of Confirmed Cases for Tokyo Olympics related personnel as of August 8, 2021 [16]

The COVID-19 related hospitalization in Japan hit the new record high 102,551 as of August 6, 2021 [22].  The number of new daily cases is reported 15,249 on August 5, 2021, also broke the single day record [23].  Furthermore, there was a huge pushback from healthcare workers for having Olympic Games this summer.  Because if the outbreak takes place, they are the ones to take care of those patients.  The pressure on the healthcare systems is already on rise prior to beginning of Olympic Games.  The recent surge of COVID-19 could push the healthcare systems to the limit.  The Japanese government announced a policy to shift for COVID patient hospitalization to limit only those who experience severe COVID-19 conditions or other severe illness [24].

This is calling some backlash from public [25].  However, it is still unknown that whether this Olympic Games played a role on recent surge.  Unfortunately, the COVID cases will linger even after Olympic/Paralympic Games, leaving the Japanese officials to deal with another dark side Tokyo Olympic Games.

The Future of the Olympic Games

Tokyo 2020 Olympics are facing multiple challenges. Undoubtedly, this is really unique situation, creating the multiple dark side of Tokyo Olympic Games, and unprecedented in our life time. The safety of workers and athletes is primary concern for Olympic Games. But certainly, it doesn’t have to cost human lives to host the games. Truly wish that these Dark Side Tokyo Olympic Games become a lesson and better will come out in the future. Lastly, applaud to the workers of Tokyo Olympics. They worked so hard to make this event possible while combatting with COVID-19 surge in Tokyo. They deserve credit for smooth operation of entire process under daunting summer heat. Thank you.